The Quad Cities Chamber of Commerce’s interim CEO is leaving the organization this Friday, July 1, to go “into the private business sector,” the chamber said in a one-paragraph announcement in its weekly email newsletter.

“Since joining the chamber team in 2019, Mike Oberhaus has served in many roles, most recently as our chief strategy officer and interim CEO,” the newsletter said. “On July 1, he will step away from the chamber and into the private business sector. Please join us in thanking him for his leadership and dedicated service. We wish him the very best!” 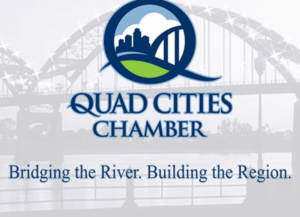 Mr. Oberhaus, whom the QCBJ could not reach for comment today, June 29, has been serving as the Quad Cities Chamber’s interim chief in addition to his role as chief strategist since the departure of former chamber President and CEO Paul Rumler. Initially, Mr. Oberhaus expected to surrender the interim spot once a permanent leader was found to replace Mr. Rumler, who left to become CEO and executive vice president of CCIM Institute on March 28.

“We don’t have an announcement about a new CEO,” Jennifer Walker, vice president of marketing & sales, Quad Cities Chamber, told the QCBJ today. “Our search committee is actively seeking a candidate.”

Mr. Oberhaus, a longtime Quad Cities education leader, joined the chamber in 2019 after retiring as the superintendent of Rock Island-Milan School District 41. He had served 33 years with the school district including as director of accounting and computer services and associate superintendent. He led District 41 as its superintendent for nine years before joining the chamber.

During his tenure, the chamber landed many successful Quad Cities developments including the deals that brought Amazon and Fair Oaks Foods to Davenport.