Rock Island Fire Chief Jeff Yerkey has announced he will retire in January 2023 after 33 years of service with the fire department.

He assumed the role of fire chief on April 4, 2016, and has also served as assistant city manager since July 2021.

“I began my career in 1990, and it has been the honor of a lifetime to serve the citizens of Rock Island for more than 33 years,” he said in a statement regarding. “I have been blessed to work with the finest firefighters that anyone would be privileged to work beside. Those in the past who mentored me, those in the present who continue to inspire me through their outstanding work, and those of the future who will continue to ensure this department can hold its own against any department anywhere.”

“The dedication of our members in fulfilling the department’s mission of saving lives and protecting property is second to none,” the fire chief added. “It has also been a privilege to work with so many dedicated and professional employees throughout all of our city departments, all of whom put tireless efforts into making our community better.”

In a news release, Mayor Mike Thoms thanked Chief Yerkey for 33 years of exceptional service to the citizens of Rock Island. “The City of Rock Island has a strong and stable fire department due to the hard work and leadership of Chief Yerkey. He will be greatly missed, but the example he has set will lay the groundwork for the next chief.”

City Manager Todd Thompson has begun a search for the next fire chief to ensure there is a smooth transition for the department.

“I want to thank Chief Yerkey for his years of service to the Rock Island community,” Mr. Thompson said in a news release. “He has provided tremendous leadership for our fire department and has been an important part of the city leadership team, including serving as assistant city manager. He will be missed, and I wish him and his family the very best in a well-deserved retirement.” 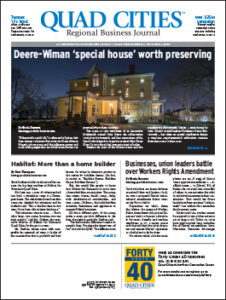