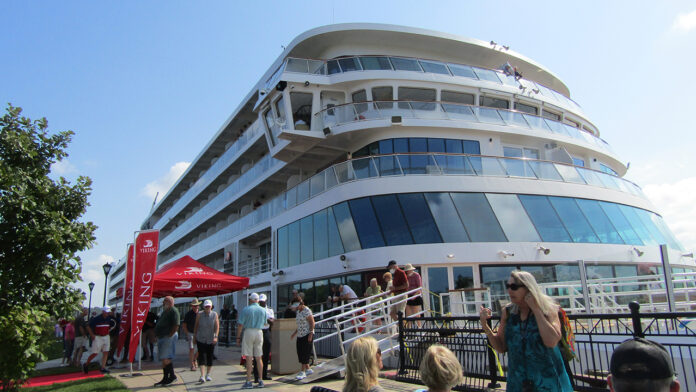 The Mississippi River is without a doubt one of the world’s great rivers, but it often has been trivialized as “the Big Muddy” rather than being thought of in the same pantheon as the Nile and the Mekong.

That is changing thanks to a resurgence of river cruise ships.

“It’s amazing that people from all over the world are coming here to experience Davenport,” Davenport Mayor Mike Matson said during the welcoming ceremony.

It is difficult to appreciate how momentous this cruise ship and its stop in the Quad Cities is for the region and communities along the river.

“This is a watershed moment for the Quad Cities regional destination,” said Visit Quad Cities President and CEO Dave Herrell in a news release. “Viking’s arrival in the Quad Cities is exciting and an important opportunity to activate our world-renowned Mississippi River. We are honored to serve Viking’s customers and are aligned with Viking to deliver an unforgettable Quad Cities experience. Their customers will participate in group tours and we are confident that they will walk away impressed with what the QC has to offer.”

Mississippi River cruising has been making a major comeback over the past decade after years of decline. Connecticut-based American Cruise Lines entered the Mississippi River cruise market in 2012 with one vessel and now has five on the river, according to an online article by Gene Sloan, who has written about cruising for more than 25 years.

According to Mr. Sloan’s article, Viking has been eyeing an expansion into Mississippi River cruising for many years. The company currently dominates the market for river cruises in Europe aimed at North Americans. It’s also a significant player in river cruises in Asia and on the Nile in Egypt (where it just began a significant expansion with a stylish new ship). But it has never offered voyages on rivers in North America — the home of the majority of its customers.

This resurgence of Mississippi River cruising is great news for the Quad Cities and dozens of other cities between St. Paul, Minnesota, and New Orleans, Louisiana. It has the potential to position the Quad Cities as a tourism destination for years to come.