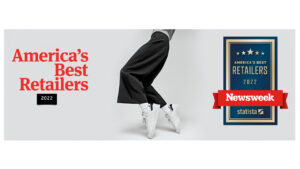 “This recognition is such an honor, and it is truly a testament to our associates, our products and our loyal customers across the country,” Von Maur President Jim von Maur, said in a news release from the Davenport-based retailer.

“Since opening our doors 150 years ago, we’ve had an unwavering commitment to offering unparalleled customer service and unmatched styles and selections. We take great pride in this commitment, and it is so impactful to be recognized and ranked as the best by those that matter most to us: our customers,” Mr. von Maur added.

Newsweek’s “America’s Best Retailers” rankings are the result of an independent survey of more than 10,000 U.S. customers who have shopped at the retailers in-person in the past three years. The survey asked shoppers to rank stores in 39 product categories, how likely they were to recommend a retailer to friends and family, as well as how they ranked the retailer on factors including price, selection and overall atmosphere. More than 150,000 evaluations were collected, the national news magazine and website reported.

Jim von Maur represents the fourth generation of von Maur family members to lead the chain. The family’s first shop was opened as the Boston Store in downtown Davenport by founder Charles Jacob “C.J” von Maur and his partners. These days the company’s growing list of Von Maur and Dry Goods stores is reaching across the U.S.

The company currently operates 36 stores in 15 states, including regionally in Davenport’s NorthPark Mall, Moline’s SouthPark Mall and at Iowa River Landing in Coralville, Iowa. In addition, its 120,000 square foot e-commerce facility in Davenport drives its online business at vonmaur.com.

In an interview with the QCBJ about the retail chain’s 150th anniversary, Jim von Maur, the founder’s great-grandson, was asked if he thought his ancestors would be proud of what Von Maur has become. “I do. I think they’d be amazed. We are the last remaining family-owned department store,” Mr. von Maur said. “There used to be hundreds.”

Others fell victims to a changing retail landscape, and catastrophic events such as the Great Depression, a world war, the farm crisis and the COVID-19 pandemic, which closed Von Maur’s doors – headquarters and stores – for six weeks in the spring of 2020.

Von Maur came out on the other side of the pandemic with an aggressive plan to widen its footprint in states such as Georgia, New York, Alabama and Oklahoma. The retailer recently opened its fourth Michigan location in Rochester Hills in March 2022 and will open its second Wisconsin location in Madison in October 2022.

“Every state is under consideration although I don’t see us going to the west coast anytime soon,” Jim von Maur told the QCBJ in that January interview. But the south, southeast, Midwest and Pennsylvania are on the radar.