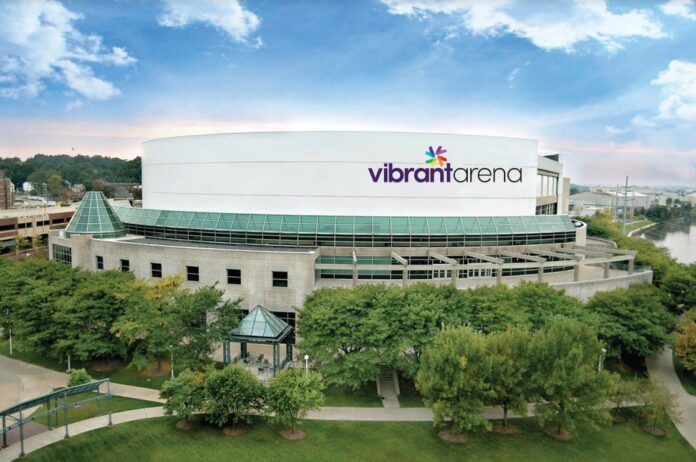 The TaxSlayer Center’s new naming rights partner plans to be a “Vibrant” part of the downtown Moline civic center.

Vibrant, the Moline-based financial services company, has agreed to a 10-year, $4 million partnership to rename the 12,000-seat facility as the Vibrant Arena at The Mark effective Thursday, Sept. 1.

The new name incorporates the original name of the arena, which opened in May 1993 as The Mark of the Quad Cities.

The financial agreement also includes “several extras,” including new paint and signage. Vibrant, formerly the Deere-Harvester Credit Union, plans to update the facility by splashing its colorful image and logo on everything – from the windows on the building’s front to developing a party patio space for special events, according to Vibrant President and CEO Matt McCombs.

The arena’s Executive Director Scott Mullen also said Vibrant delivers much-needed muscle to help the facility with everything from technology and marketing to community reach.

Vibrant boasts more than 55,000 members and has $1.1 billion in assets with credit unions stretching from Iowa east to Indiana.

“The Quad Cities is our home; it’s part of who we are, and it means a lot to us to be the first local business to hold the naming rights to this arena,” Mr. McCombs said.

Previously, the Illinois Quad City Civic Center Authority had agreed to only two naming rights deals in the facility’s history.

The now defunct, Cedar Rapids-based Iowa technology company i Wireless inked a $4.5 million, 10-year agreement for the arena to be renamed iWireless Center on July 19, 2007. That deal was later extended for two years while the authority searched for a new title sponsor.

However, before the extension really kicked in, the Georgia-based online tax and finance firm TaxSlayer signed a 10-year agreement to buy the naming rights for $3.3 million. On Oct. 1, 2017, the iWireless Center became the TaxSlayer Center.

The current deal with TaxSlayer was still in effect, but Mr. Mullen said the contract allowed the arena management to seek a better, new deal from another business. The civic center authority agreed to the deal Thursday, Aug. 18, before a media conference to announce the change.

“We are not just sending a check from afar – we are here and we want to be a part of seeing events here and making this arena great for our community,” Mr. McCombs said.

“Many of us started seeing concerts and events at The Mark back in the 1990s, and nodding back to those roots in the new name was part of the discussion from the very beginning,” he added. “We see this as our opportunity to invest in our community in a way that has a positive impact on everyone here.”

Mr. McCombs recalled his first event at The Mark – seeing the Harlem Globetrotters at the arena as a 12-year-old in the 1990s – and was delighted to share the traveling basketball show with his four daughters at the local arena earlier this year.

“We are thrilled to be partnering with Vibrant,” Mr. Mullen said.

“They are a local company with fresh ideas that will make our award-winning venue even more attractive and a place where our guests can proudly enjoy the top-caliber entertainment options we provide.”

The opening act at the sold-out arena in May 1993 was Neil Diamond — who would go on to make a number of return visits under all three of the arena’s previous names: The Mark, the iWireless Center and the TaxSlayer Center.

Though the name changes came relatively seamlessly, some in the Quad Cities were not fans of the changes when they were announced, Mr. Mullen noted.

The hardest one for many to let go of was the arena’s original name, he said, with many locals continuing to call it The Mark.

Thursday’s news conference, held on the arena floor, began with a video montage saluting the arena’s long and illustrious list of concerts.

The first show after the name changes will be Styx, REO Speedwagon and Loverboy on Tuesday, Sept. 6.

The local civic center also has served as the home to college basketball’s “March Madness” events – ranging from the current Missouri Valley Conference women’s tournament to the now defunct Mid-Con Conference men’s tournament (late 1990s), and an NIT game between the University of Iowa and DePaul University.

The now-traditional local high school basketball event – the Iowa-Illinois Shootout – also began at the arena in 1994 but later moved to Augustana’s College Carver Center in 2001. Illinois High School Association postseason basketball games also have been played there in the past.

In a nearly 30-year history, the facility also has served as a popular site to host weddings, trade shows and large meetings and gatherings of all kinds.