For months, the Quad Cities community has been working to help Jackie Celske –  “devoted Quad Citizen and overall awesome person,” according to her friends at Front Street – win a 16-year battle with autoimmune diseases.

A Go-Fund me campaign started by her sister, Jessica Andress, for example, has raised almost $30,000 for the experimental immunotherapy treatment Ms. Celske is relying on to give her back her life. Treatment cost is $65,000 and rising. 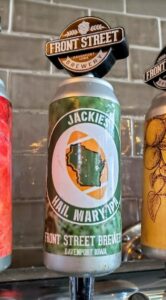 Businesses also have stepped up. For example, Front Street added a special limited edition beer called “Jackie’s Hail Mary IPA.” It will be on tap at the brewery at 421 W. River Drive, Davenport, through Saturday, Oct. 22.

Also this Saturday, friends will host a fundraiser at 5 p.m. at the Iconic Event & Reception Venue, 1725 2nd Ave. & Arts Alley, Rock Island. The event will feature a taco dinner, silent auction, raffles and music by the Dani Lynn Howe Band. Questions? Contact Jennifer at (309) 337-9326. To make donations go to Vemo @JackieCelske or via Paypal to J.Celske@gmail.com.

In the flier for the Saturday event, friends wrote that Ms. Celske’s immune system is rapidly deteriorating, causing persistent inflammation in her nervous system, significant pain and organ damage. This new treatment will hopefully restore her immune cell function so she can get back to her life in the QC – pain free.”

Front Street also detailed the challenges facing Ms. Celske, an ardent Green Bay Packer fan, on its Hail Mary Facebook post. Ms. Celske opted to try an experimental immunotherapy treatment offered by a doctor in Florida after two failed surgeries, the last of which required her to quit her job

“Unfortunately, Jackie’s ‘Aaron Rodgers Hail Mary’” attempt at regaining her health is not covered by insurance,” the Front Street post said. “Well, Jackie is BACK in the QC and ‘Jackie’s Hail Mary IPA’ is available now at the FSB Brewery & Taproom and we’re donating $1 from each pint poured of it to her benefit this Saturday.

Other businesses also have stepped up including Buttercup Candle Co., which is creating a customized candle and donating 30% of sales back to Ms. Celske’s fund.