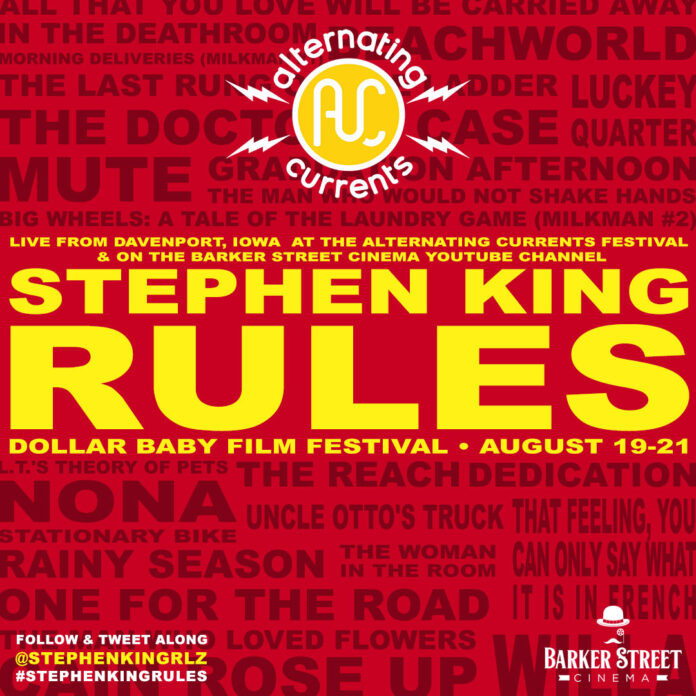 With the blessing of Stephen King, some of the Horror Master’s Dollar Baby Deal films based on his short stories will be featured at the Aug. 18-21 Alternating Currents Festival in the Quad Cities.

Mr. King gave the green light for a selection of unreleased films based on his works to be screened for free across Quad Cities downtowns as part of the Stephen King Rules Film Festival, according to a Downtown Davenport Partnership news release.

The Barker Street Cinema team of Leah Coghlan, James Douglas, Norm Coyne, and Anthony Northrup will return to host the film festival this August as one of the headline attractions during the Alternating Currents Festival in Davenport.

This marks the fifth year of the festival that was organized by Downtown Davenport Partnership (DDP) – an affiliate of the Quad Cities Chamber – in collaboration with local talent across the region. And it’s the second year that Barker Street Cinema has been given the go ahead by Mr. King to screen the films in person as well as to a large and growing online audience.

This year’s free collaborative festival will take place Thursday-Sunday, Aug. 18-21, at more than 20 venues including in downtown Davenport, Rock Island and Moline. It will showcase more than 100 performances including film screenings, musical acts, comedy and art-related events. More than 60 national, regional and local acts will perform over the four-day festival.

Since 1977, Mr. King has allowed emerging filmmakers to adapt his previously unproduced short stories into films that may help launch their careers through his Dollar (or Dollar Baby) Deal. In a nutshell, the American horror author grants permission to students, aspiring filmmakers and producers to adapt one of his short stories for $1, with Mr. King retaining the rights to his work.

The Stephen King Rules Film Festival was developed by the production company Barker Street Cinema to showcase an “exciting” line-up of those independent movies, along with interviews and panel discussions with the filmmakers, the news release said.

In 2018, Barker Street Cinema joined the Dollar Baby alumni with its own adaptation, “The Doctor’s Case,” based on the Sherlock Holmes story written by Mr. King. The film won 15 awards at more than 40 film festivals and was reported by ScreenRant to be the fifth-best Stephen King adaptation according to the Internet Movie Database.

“We have seen firsthand the difference making a film that lives in Mr. King’s orbit can make,” said Mr. Douglas. “The fact that he has once again given us his blessing to host the festival in person and online and to be part of connecting these films to a global audience means the world to us.”

All Alternating Currents events are free to attend. Visitors can travel from one venue to the next and attend indoor and outdoor events. In between performances, festival-goers can explore the walkable Downtown Quad Cities and experience restaurants, shops, bars and other venues.

“The Dollar Baby program aligns so well with our mission to highlight up and coming creatives, and we are thrilled to add this programming to the Alternating Currents Film Festival this year,” said DDP Event Director Jason Gilliland. “This will be a fantastic opportunity to feature filmmakers and will be a popular attraction for festival goers.

Since in-person festivals were operating at a diminished capacity in 2021, the release said, Mr. King granted Barker Street Cinema special permission to screen the festival to offer something for everyone to enjoy during isolation. The festival hosts were overwhelmed by the worldwide engagement and sense of community.

“We were blown away by the hundreds of comments stating that this online event helped them combat various issues ranging from mental health to even getting through chemotherapy,” Ms. Coghlan said. “While we aren’t in exactly the same situation as 2021, being able to broadcast online again will mean a lot to this fanbase.”

In 2021, the film festival attracted tens of thousands of viewers from 28 countries. Since then, the team has added new elements to make the festival even more significant.

“Taking this show on the road means we have to level up,” said Mr. Coyne. “We have some special surprises in store for Alternating Currents.”

The Stephen King Rules festival will run Aug. 19-21 live at the Figge Art Museum. The films and filmmaker interviews will also be streamed on the Barker Street Cinema YouTube channel. Viewing in-person and online is free.

Viewers can interact with the Stephen King Rules festival all weekend during a tweet along party at @stephenkingrlz using the hashtag #stephenkingrules.