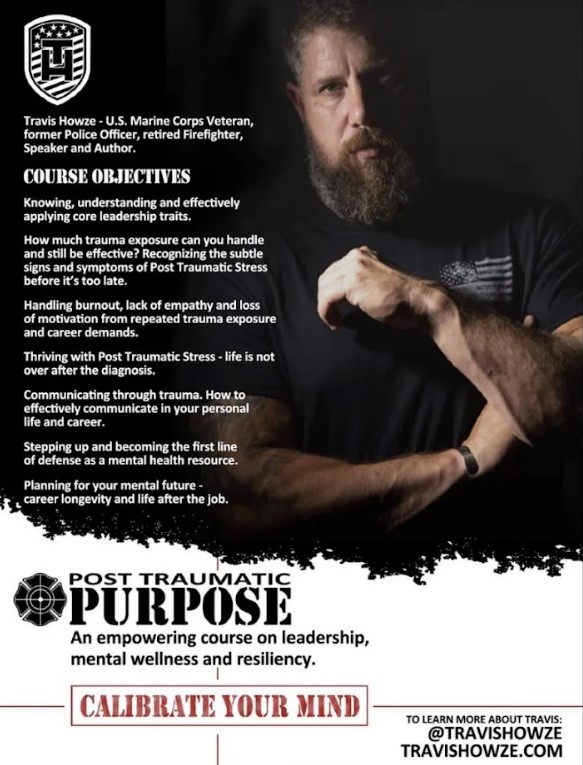 First responders – police, firefighters, EMS, dispatch workers – and their families are urged to take advantage this month of three days of free mental health courses designed and led by a nationally known expert on trauma and PTSD.

The “Post Traumatic Purpose” sessions that will be offered Tuesday-Thursday, Nov. 15-17, at Vibrant Arena at The Mark will be taught by Travis Howze, a U.S. Marine Corps veteran and former police officer and firefighter. In the course of his duties, Mr. Howze helped collect the bodies of the Charleston Nine, the firefighters who died fighting a blaze in a massive furniture superstore in Charleston, S.C., in 2007.

The pair of courses being offered each day will be hosted by MABAS 43 Peer Support Time, QCOMM911 (the Illinois Quad Cities emergency dispatch) and the City of Moline.

Course objectives include recognizing signs and symptoms of mental health challenges, handling burnout, communicating through trauma and planning for the mental health future after retirement. There will be two three-hour sessions each day at 8:30 a.m. and 1:30 p.m. Attendees only need to attend one course.

Mr. Howze’s “Post Traumatic Purpose” course is open to all first-responders and their family members. Those interested in registering can do so here.

Among those urging first responders to take advantage of the offer is Moline Fire Lt.  Jamie Hudson, who has been a member of the fire department for a little more than two decades.

For the first 10 years or so, Lt. Hudson said in a story promoting the event on the City of Moline’s website, that the stress and trauma associated with the job made him “prickly and quick to anger.”

The firefighter, who would later join the MABAS 43 Peer group, also said that back then he was often sullen and distant with his wife, and he snapped at strangers. “I was a very toxic person when I was struggling mentally,” he said.

His divorce and a general sense that something was wrong led him to seek help, and through therapy, he learned how to manage his emotions and deal with stress, the web post said. That decision saved his career and improved his life. Now he’s working to share that message with others through the MABAS 43 Peer Support Team formed in 2019.

Lt. Hudson said he shares his story because he wants other first responders and their families to learn to be aware of and monitor their mental health often with the help of their peers

“You need that fight or flight response for the job, it’s not a normal thing to run into a burning building or cut people out of a crashed car,” Lt. Hudson said. “We experience things that 99% of people never do and we do it every day.”

The MABAS group is primarily colleague-to-colleague and involves checking in on teammates and talking things out and encouraging them. Members are trained to recognize when someone needs a little extra, professional help.

The need for both peer-to-peer and professional counseling has only increased, the city’s post said. An exacerbating factor in rising stress levels is that there are fewer first-responders than ever, meaning longer shifts, more calls and less downtime to recover mentally from the stress of those calls.

“This course is designed to help first responders deal with things like sleep deprivation, marital problems and anxiety,” Lt. Hudson said. “Spouses are encouraged to attend as well to help them recognize the signs of mental stress and fatigue in their partners.”

The event is free, but registration is required.