Efforts to turn 172 acres of land in East Moline into a new forest preserve took a step forward Monday night.

The East Moline City Council voted to approve a resolution consenting to the purchase of the land by the Rock Island County Forest Preserve District.

The council voted 5-2 in favor of the resolution, which is one of the steps necessary to advance the forest preserve project.

After the vote, Mayor Reggie Freeman said he is considering vetoing the council’s decision.  City Administrator Doug Maxiener said that in a resolution, the mayor has the authority to veto the council’s vote. The council can override that veto with a two-thirds majority vote, which is five votes.

The mayor did not go into details about the reasons behind a possible veto, but the possibility of developing the property seems to be a main issue with some city officials.

Alderman Gary Almblade, who voted against the resolution, told the Quad Cities Regional Business Journal on Tuesday that he has nothing against a forest preserve plan, but believes at least some of the land can be economically developed.

“I have to balance the needs of the city… There is some developable areas in that property,” Mr. Almblade said.

Mr. Swanson said that he is hopeful that a possible veto will get enough council votes to override the move, and the forest preserve project will quickly move forward.

The commission has been pushing for the project  – touted as the district’s first significant land acquisition since the 1950s – to help with preservation efforts and help save endangered animals. This would be the district’s seventh park. 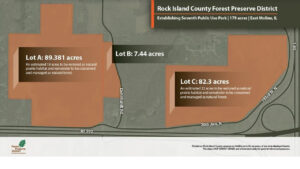 The 172-acreage sought by the district is mostly made up of a oak-hickory forest with about 40 acres of fallow field space that could be restored to native prairie.

The new acreage is located near the district’s existing 173-acre Illiniwek Forest Preserve in Hampton, Illinois, and the Elton Fox Bald Eagle Refuge owned by the Illinois Department of Natural Resources.

During the council meeting, Mr. Swanson urged the council to approve the land purchase resolution because it is the “highest and best use of the property.” He said a new forest preserve would not only help preservation efforts, but would also be good for the community by attracting more tourists to the area and helping the local economy.

“This is literally a once-in-a-lifetime opportunity,” added Mr. Swanson, referring to a $1 million grant the commission has been selected to receive for the project.

If the forest preserve plan moves forward, it could be open by the spring or summer of 2023, said Jeff Craver, director of the forest district.

But, he added, that once open, there will still be much work to do. For instance, it will take three to five years to get a prairie established in the new forest preserve, Mr. Craver said.

“This recognition represents a huge win for conservation efforts and our community as a whole,” Mr. Craver said in a recent news release. “ It’s a historic moment for the Forest Preserve District.”

“This preserve would be another natural resource and a huge asset in preserving and protecting critical species,” Mr. Swanson said in a news release. “This new natural resource also gives our community further bragging rights to tell our ‘QC, That’s Where!’ story.”