As the beers flow this year at Crawford Brew Works (CBW), the brewery also is planning to pour some funding into a few Quad Cities non-profits.

The Bettendorf-based CBW is expanding its Crawford Culture of Care (3C) initiative to help five local nonprofits it has selected as its 2022 Care Partners as well as help the organizations with awareness and additional fundraising. 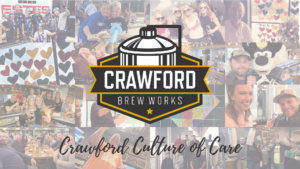 Launched last year, the 3C initiative raised nearly $60,000 in its first six months for local nonprofits mainly through hosting a Guest Bartending Series with the agencies. But Crawford now is taking its 3C mission to the next level by expanding its fundraising opportunities and engagement with the partners.

“We plan for 3C to be a core part of our culture at the brewery, and to have a business model that goes above and beyond in our efforts to support local organizations that put intentional care toward our community and the people who are a part of it,” Tom Taylor, CBW general manager, said in a news release.

Through its 3C partnerships, CBW will shine a two-month spotlight on each Care Partner and support each organization through mission awareness and fundraising. The establishment will support each partner through three aspects: fundraising through beer sales, a Guest Bartending Series, and a large event and/or series of events celebrating the culture of the non-profit organization.

Its 2022 Care Partners and their designated months are:

“We started small last year, introducing the Guest Bartending Series, then adding a beer on tap through which we donated a portion of sales,” Mr. Taylor said. “These small steps achieved big results and with these planned care partners we can continue to take this initiative even further into the future.”

For 2022, CBW will be launching a large single event or series of events specifically celebrating the culture of the spotlight Care Partner. Beginning in March and April, CBW will host a Brews ’n’ Blues Concert Series as part of the Mississippi Valley Blues Society’s (MVBS) fundraising. MVBS will have representatives onsite to answer questions and take direct donations while CBW will donate a portion of sales during the performances. The brewery also will fund the concert series.

“We are excited to explore a new approach to fundraising that creates a positive relationship with the local business community,” Bob Clevenstine, MVBS’ fundraising chairman, said in the release. “Crawford Brew Works has gone above and beyond supporting the MVBS mission.”

Along with the guest bartending series, CBW will have a beer on tap from which it will donate $1 of every pint sold to the partner organization. “It’s a good way to get involved if you can’t make it to an event, but we want to ensure we’re going above and beyond what’s already been done,” Mr. Taylor said.

CBW’s Guest Bartending Series has been the most successful aspect of 3C fundraising and features a guest bartender on The Mezz – CBW’s private event space – along with live music. With assistance from CBW staff, the guest bartenders serve their friends and other patrons with all the tips and proceeds from keg sponsorships going directly to the Care Partner.

Kayla Kiesey, director of events and community partners for Big Brothers Big Sisters of the Mississippi Valley, applauded CBW’s enthusiasm and engagement with area nonprofits. “It’s partnerships like this that help bring more awareness to the cause and raise essential funds,” she said.

In fact, Big Brothers Big Sisters raised more than $8,000 during its guest bartending event held at CBW in December. In the same month, the Quad City Bicycle Club raised nearly $9,000 for its “Bikes for Tykes” program by guest bartending there.

While the new large event addition will help organizations expand their fundraising, Mr. Taylor said “Its goal, at its core, is to be a celebration of the good work local organizations are doing. The hope is that this will also attract more volunteers, help create and sustain donor relationships, and bring awareness toward the full complexity of services these organizations offer.”

Looking beyond 2022, CBW is already accepting submissions for 2023 Care Partners, with a few plans already in the works.

For a schedule of upcoming events, visit www.CrawfordBrewWorks.com/events. Non-profit organizations interested in getting involved should email info@crawfordbrewworks.com.