CLINTON, Iowa – This community is open for business and should get ready for more big economic news.

Those were two of the messages delivered Wednesday during the 68th annual meeting of the Clinton Regional Development Corporation (CRDC) at the Eagle Point Lodge. CRDC officials delivered a review of economic success stories from the past year – and potential big news on the near horizon.

Clinton is getting close to bringing in a major national company that will create about 60 high-paying jobs, Erin Cole, CRDC president and CEO, told the crowd.

The project – being referred to as “Project MG” by the CRDC – involves a company that could make a multi-million-dollar capital investment in Clinton and build a facility at the Lincoln Industrial Rail and Air Park, Ms. Cole added.

She said “Project MG” is not a done deal, but close to becoming reality.

CRDC officials would not release the name of the company, but said it is now working with the state of Iowa on an incentives package.

According to a State of Iowa application for a revolving loan for fiscal year 2022, Clinton’s “Project MG” is described as: “Company is building a plant to convert locally produced agricultural feedstock into renewable fuels. Rail facilities improvement will connect the plant to UP railroad.”

Ms. Cole said bringing in new employers to the community is great, but the benefits go beyond the addition of one company. The city and its residents will benefit in many ways.

“That’s not the whole story. You see a ripple effect in the community with this with new housing projects and more,” she said.

Much of Wednesday’s meeting was devoted to reviewing the organization’s 2021 economic success stories.

“Big things are happening right in our backyard… Economic development is not a sprint; it’s a marathon,” Mr. Sokolovich said. 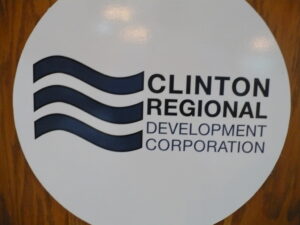 He thanked the many volunteers who helped CRDC efforts in the past year. Since 1953, the CRDC has been uniting and leading the region’s business and civic leaders to improve the business climate, retain existing businesses and attract new ones.

In other matters discussed at the meeting: