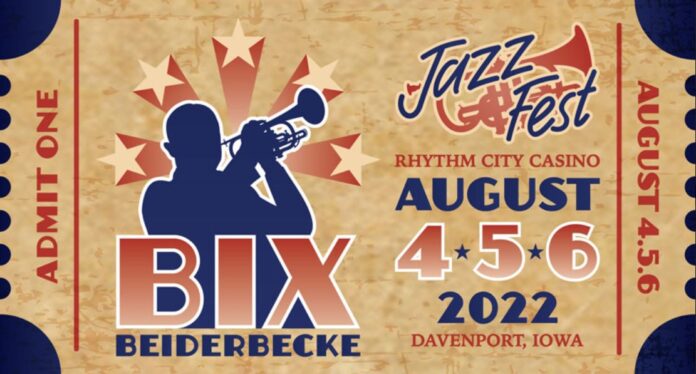 The 51st Bix Beiderbecke Jazz Festival is set for Thursday through Saturday, Aug. 4-6, at the Rhythm City Casino Resort Events Center, 7707 Elmore Ave., Davenport, at the juncture of Interstates 74 and 80.

Eight professional bands and the Bix Youth Band will perform at five five-hour-long concerts. Bix is the longest-running music festival in the Quad Cities area. Musicians from all over the country comprise several of the bands.

The New Orleans Night Owls is made up of seven players, three of whom lead their own bands. The Dave Bennett Quartet is led by a clarinetist who has played with the New York Pops Orchestra at Carnegie Hall. The Graystone Monarchs is led by Davenport drummer Josh Duffee.

The bands also include NOLA from Des Moines, which has played in Europe and jazz clubs in New York City and New Orleans. Joe Smith and the Spicy Pickles will bring their Swing music in from Denver. The Chicago Cellar Boys are best known for their Roaring 20s sound of joy and fun. T.J. Muller’s Trio includes musicians who play nine instruments.

There will be two free concerts during the event. The Chicago Cellar Boys will play Bix’s own horn  at the Putnam Museum’s auditorium in Davenport from 3-4 p.m. Thursday, Aug. 4. Also, NOLA will play at Bix’s grave at Oakdale Cemetery in Davenport 10-11 a.m. on Saturday, Aug. 6.

The Bix Jazz Society was formed in 1971 to honor and keep alive traditional jazz music from 1910-1930. It was named after the innovative cornetist – Davenport native Leon “Bix” Beiderbecke, still considered a top jazz artist.

The Bix festival at Rhythm City is best accessed from 53rd Street in Davenport, north on Elmore Avenue. For more information, go to bixjazzsociety.org.