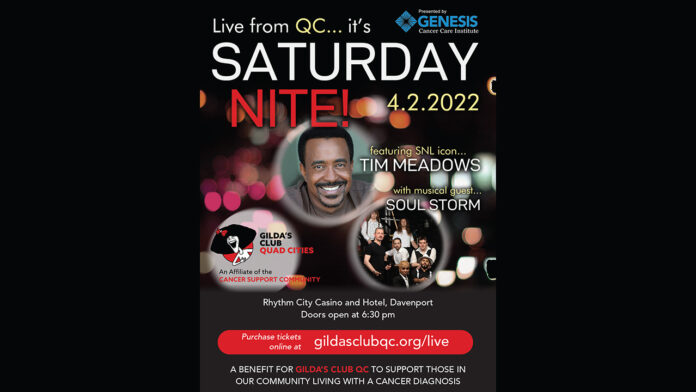 “This is our signature event and benefits the families and caregivers who are coping with cancer,” said Michelle Darland, the Quad Cities club’s development director. “It’s not just the one person who gets cancer that is impacted, it’s the whole family.”

The evening not only will feature Mr. Meadows, one of the longest-running SNL cast members, but also a performance by Soul Storm, a popular Quad Cities dance band. Mr. Meadows is an American actor, comedian and woodworker. He appeared for 10 seasons on SNL, receiving a nomination in 1993 for the Primetime Emmy Award for Outstanding Writing for a Variety Series.

The gala will be a night of celebration and support for individuals and families dealing with the devastating diagnosis. Doors will open at 6:15 p.m. with the event beginning at 6:30 p.m. The event will include heavy hors d’oeuvres, cash bar, fund-a-need and a silent auction. Tickets are $75 each or $500 for a table of eight.

“We used to do Intimate Conversations with a globally-known speaker, but it was not tying back to our mission,” she said. “It’s Saturday Nite pays homage to Gilda (Radner) and it’s why we do what we do.”

Ms. Radner’s joy of life was the foundation of the Gilda’s Club Mission. The first cast member hired for SNL, she died on May 20, 1989, of ovarian cancer. Gilda’s Club is named in honor of the comedian, who during her cancer journey found emotional and social support from a non-profit organization known as The Wellness Community. The Gilda’s Club Mission exists to provide that same support for others living with cancer and for their families and friends. The first Gilda’s Club opened its signature red door in New York City in 1995.

Ms. Darland said COVID was crippling to the club’s event-based fundraising. “It made us realize we need more of a sustainable donor revenue flow…,” she said, adding that “COVID didn’t do us any favors.”

Due to the club members’ compromised health, she said “We went full-stream virtual (with programming), which was great. But the whole point of Gilda’s Club is the social interaction. So a lot of people were feeling disconnected.”

Also in 2020, the club sold its signature mansion on Davenport’s River Drive and partnered with UnityPoint-Moline and Genesis West in Davenport to open Gilda’s Clubs on those two hospital campuses.

For more information on Its Saturday Nite!, or to inquire about sponsorships, contact Michelle Darland, development director at Gilda’s Club Quad Cities, at michele@gildasclubqc.org or at (563) 326-7504.