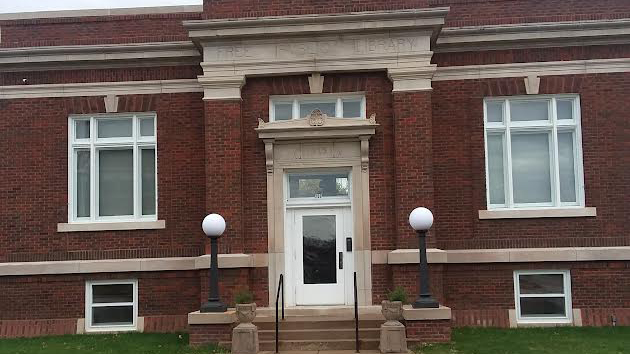 ALEDO, Ill. — A grassroots organization — powered by residents and created to write a strategic plan for Mercer County — reports that it has made a $15.7 million impact since March of 2020 on this largely rural county of 15,700 residents.

Kyle McEwen, executive director of Mercer County Better Together (MCBT), clearly is proud of how far the community organization has come along on an operating budget of about $120,000.

“It takes 10 years for a nonprofit to go from brand new to deeply entrenched in the community,” he said in an interview in his office at Aledo Tech Center, the city’s historic, redeveloped Carnegie Library. “We’re ahead of schedule.”

According to the March 2020-September 2021 MCBT Impact Report released Nov. 17, the agency has helped 95 businesses and nonprofits apply for COVID-19 federal small business loans, Small Business Administration’s Paycheck Protection Program loans and Illinois Back2Business grants. The $375,000 it secured for applicants had a $3.7 million economic impact on the county, the report shows.

In that time, MCBT also secured $15,000 in grants to create a broadband buildout plan for the county as well as $30,000 in state grants to help ensure an accurate U.S. Census count. The latter is expected to result in an economic impact of $10.37 million, or about $2,000 for every person counted.

MCBT also has served as the tax-exempt fiscal agent for the Mercer County Jaycees’ Toys for Nancy’s Kids program; assisted with updates to park and recreation centers; invested in children’s literacy; and brought mental health resources and new technology to schools.

It also has helped nine Mercer County towns complete the paperwork necessary to receive American Rescue Plan funds, which Mr. McEwen estimates have had a $1 million impact in those communities.

None of those things would have been possible, however, without the community visioning process and the leaders who created the Mercer County Strategic Plan. It’s a living document that, Mr. McEwen said, will evolve to meet needs identified by the community. For example, the organization’s quick response to the unexpected challenges created by COVID-19.

The strategic plan’s strength lies in the fact that it truly is a homegrown product, Mr. McEwen said.

The seeds were sown by a pair of sisters who were born and raised on a farm in Mercer County’s New Boston Township. Dorothy Looser-Flake and Roberta Looser cared so much about their community that they left a portion of their estate to serve charitable causes in Mercer County. Looser-Flake died in 2006 at age 93. Her sister died at age 92 in 2011.

The trio launched what MCBT calls a “comprehensive, data-driven countywide planning process” that would last 18 months.

Their first step was to find out what residents wanted in their Mercer County Strategic Plan. To overcome parochialism, Mr. McEwen said, MCBT reached out to residents in all 11 population centers in the county via surveys, small group discussions and a community forum. Care also was taken to ensure that all demographic groups were represented, particularly what the champions called the “missing voices” — residents who generally are excluded from planning and decision-making processes.

A steering committee, which would later become MCBT’s board of directors, was formed and in 2016 two part-time communications coordinators were hired. One of them, Mr. McEwen, an Aledo native, went on to direct the central organization built to implement the countywide strategic plan and do the priority work residents identified.

In addition to focusing on implementing the actions and tasks identified and meeting new needs in the community, the organization is working to ensure MCBT’s continued existence.

To find out more or to read the strategic plan, visit https://www.mcbettertogether.org/.