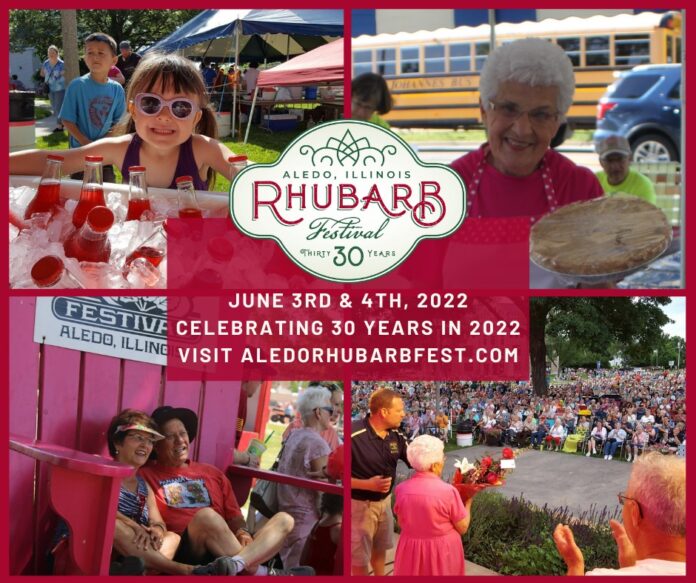 ALEDO, Illinois – The Aledo Rhubarb Fest will celebrate its Pearl Anniversary on Friday and Saturday, June 3-4.

That suits to a tee this popular 30-year-old, small-town gem that features a slate of events and entertainment that will compete with the star of the show: tasty concoctions created from the stalks of its signature showy perennial vegetable.

The backdrop for this year’s Rhubarb Fest continues to be Aledo’s downtown – part of a national historic district that features 75 contributing buildings and Aledo’s Central Park in the city’s center. City leaders also are proud of the historic renovation going on in Aledo’s downtown, and Rhubarb Fest organizers are urging visitors to “stroll up a block or two north of the park and check out the progress.”

Organizers describe the festival as a celebration of all things rhubarb from pie and ice cream to soda pop. “If it’s rhubarb, it’s here,” the website promises.

It’s no wonder then that the town of 3,600 residents – the county seat of Mercer County – is the official Rhubarb Capital of Illinois. That’s thanks to former Gov. Pat Quinn and a 2007 proclamation by the Illinois General Assembly.

As hardcore regional rhubarb lovers may know, Rhubarb Fest was founded in 1990 by Darlene Johnson to boost her cousin’s shop, the House of Burgess. Ms. Johnson and cousin Barbara McWhorter offered samples of 13 rhubarb dishes in front of the store. From those little rhubarb seeds – packets of which are handed out at the festival each year – Rhubarb Fest grew almost as fast as a rhubarb stalk.

Before COVID-19, the two-day event regularly featured crowds of 8,000 to 10,000. This year, the city hopes to return the fest to its pre-pandemic form.

The festival, at the crossroads of Illinois Highways 17 and 94, is held each year at Aledo’s Central Park and the Mercer County Courthouse lawn, and it spills into the streets of historic downtown Aledo. Entertainment also is presented all day long at the park’s bandshell.

To mark the festival’s 30th Anniversary, organizers have added entertainment each night on the bandshell stage beginning at 7 p.m. Acts include “A Rock & Roll Tribute Band from Elvis to the Beatles” featuring the Neverly Brothers on Friday, June 3, and “10 of Soul”, an 11-piece band featuring tunes from the soul, funk, and blues genres on Saturday, June. 4.

“If you’re coming for the full festival experience, we recommend you come during the day, but we also invite you back in the evening for our nighttime entertainment,” the website said. “For the most up-to-date information, including details on parking and shuttles and other Rhubarb Fest event happenings continue to check back on this website or our facebook page Aledo Rhubarb Fest.”

Rhubarb Fest’s tasting tent continues to be one of its most popular features. It is open from 10 a.m. to 1 p.m. both days and generally packed with folks sampling a wide variety of treats. Local churches and nonprofit groups also will be selling homemade rhubarb pies and other rhubarb baked goods again this year.

But organizers are urging festival-goers to beware of “Rhubarb Regret.” Ms. Johnson coined that phrase to describe what happens to visitors who arrive after the pies and treats are all gone. To avoid disappointment, organizers say, show up before noon for the best selection.

In addition, area organizations will be serving food, including:

Another highlight of the events is the antique, craft and flea market vendors at the Central Park Market from 9 a.m.-4 p.m. both days. On Saturday, as many as 80 additional arts and craft vendors will set up shop at Crafts In the Courtyard to sell their wares on the historic Mercer County Courthouse square from 9 a.m.-4 p.m.

Visitors also are encouraged to visit Aledo shops and restaurants or take a free trolley tour to see the town’s sites and explore its history. Free children’s activities also are held in the Kid Zone.

Attendees should remember that Aledo is a small town with few parking lots, organizers say. So plan to park on city streets, wear walking shoes and watch for complimentary golf cart shuttles that run through the Fest area.

There is a limited amount of handicapped parking available on the 100 block of South College Avenue. On Saturday only, a free shuttle bus will run from First Baptist Church, 800 NE Sixth Ave., to the heart of the Fest. It will keep making a loop from 9 a.m.- 4 p.m. Saturday. The event goes on rain or shine, so if the weather is dicey, grab a raincoat and or bring your umbrella.