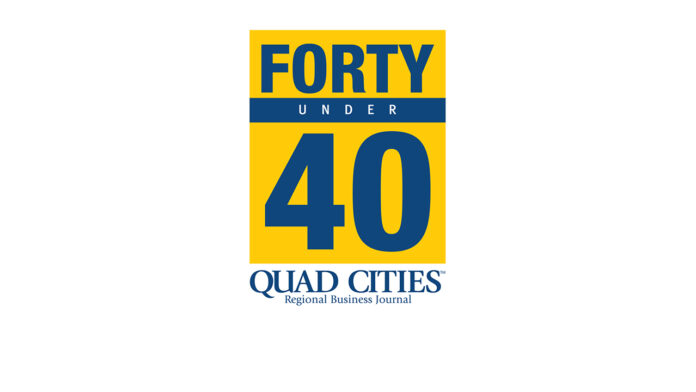 A group of 40 young professionals who represent area businesses, nonprofits, governments and other organizations will be recognized Thursday, Nov. 10, when the Quad Cities Regional Business Journal hosts its first-ever Forty Under 40 Awards dinner.

The inaugural class, selected by a panel of area business leaders, will be honored during the awards dinner scheduled from 5:30-8 p.m. at the Quad Cities Waterfront Convention Center, Bettendorf. The honorees, who were selected from dozens of nominations, will receive a trophy from the QCBJ. Each recipient is being honored for making a difference in the Quad Cities through his or her workplace and community.

“We are so excited to bring back the Forty Under 40 awards to the Quad Cities community,” said John F. Lohman, group publisher and founder of the Corridor Media Group, the parent company of the QCBJ.

The awards program provides an opportunity for the region to celebrate the hard work and community involvement of many of the region’s young leaders.

“One of the big challenges in the region is attracting and retaining young professionals,” he added. “We’re hopeful that this awards event will help play a small part in celebrating these young professionals who are doing so much for their organizations and communities.”

Nominations were accepted from area employers, nonprofit boards and colleagues. Nominees also could be self-nominated. To be eligible, nominees had to be under age 40 as of Nov. 10, 2022, and live or work in the QCBJ’s coverage area of Scott, Clinton and Muscatine counties in Iowa or Rock Island, Henry and Mercer counties in Illinois.

The selection committee of Quad Cities business and community leaders was hand-picked by the QCBJ. In future years, a subcommittee of the prior year’s Forty Under 40 class will select the next year’s class.

Award nominees were judged on their business success and civic/philanthropic activities.

The Forty Under 40 class will be given the opportunity to select an area charity that will receive a financial award.

This will mark the first time in a decade the Quad Cities has had a 40 Under 40 recognition event. For 10 years beginning in 2003, the Black Hawk College Foundation at the Quad Cities campus hosted its own Quad Cities Area Leaders Under 40 awards program. The last year of the Leaders awards was in 2012.

The QCBJ will profile all 40 award winners in its Oct. 31 edition. To subscribe, visit quadcitiesbusiness.com.

Jennifer DeWitt is the editor of the Quad Cities Regional Business Journal.