In 1897, when D.D. Palmer founded his Palmer School and Cure – and the chiropractic profession in Davenport – people traveled the world over to the Iowa rivertown hoping that his new mode of health care would remedy what ailed them.

Now 125 years later, the institution that still carries his name – Palmer College of Chiropractic –  is marking the anniversary milestone by celebrating with scores of alumni who have spread the benefits of chiropractic care around the globe. Palmer College, the first and largest chiropractic college in the world, boasts graduates in 70 countries as well as in every state in the United States. 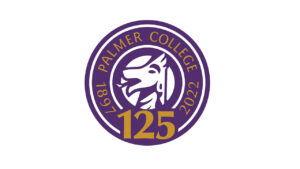 More than 1,000 Palmer alumni and guests will converge on the Quad Cities from Thursday to Saturday, Sept. 15-17, for the annual Homecoming and to celebrate their alma mater’s 125th anniversary. Highlights will include a party on Saturday at the RiverCenter in Davenport; dedication of the new Palmer Student Housing on Perry Street; and a Legacy Family Open House at which generations of Palmer alumni will gather.

The three-day event also will include opportunities for professional development for the chiropractors, including 24 hours of continuing education credits presented by dozens of experts. The Palmer Center for Chiropractic Research also will present its research.

Across the Quad Cities region, Palmer’s 125th anniversary will be marked by the Interstate 74 bridge lit as Palmer Purple, and Front Street Brewery & Taproom in downtown Davenport brewing a commemorative purple beer Wyvern Haze. In addition, the cities of Bettendorf, Davenport, Moline and Rock Island are proclaiming Sept. 18 as Palmer College of Chiropractic Day.

Palmer, whose Main Campus spreads across the crest of Brady Street’s hill, now educates chiropractic students at three campuses including its main campus located in the Hilltop Campus Village area. It also operates branch campuses in Port Orange, Florida, and San Jose, California, and has a total current enrollment of 2,100 students.

“During the 125th anniversary year of the founding of Palmer College, we’re celebrating our past with a sharp eye on our vision for the future – a future that uncovers ways to ensure everyone understands the benefits of chiropractic care and the tremendous opportunities and satisfaction a career in chiropractic can bring,” Dr. Dennis Marchiori, Palmer College Chancellor and CEO, said in a news release.

According to the college, Palmer’s future could impact millions of people around the globe as a documented          1 billion people globally are impacted by spinal disorders. It is the No. 1 cause of disability worldwide and the top reason opioids are prescribed.

As a leader in the profession, Palmer is investing in student-learning innovation and its campuses – investing more than $80 million alone in Davenport, where the historic campus is being renovated into state-of-the-art spaces.

The college’s role in both the history of the community and the profession is amazing, Mr. Marchiori said. “There are instances of our first generation of alumni being jailed for practicing what some considered an illegal profession. Those lawsuits were fought and won, but the lessons of perseverance remain.”

Today’s graduates and chiropractors, he added “are as committed as those who came before us to leading the profession and ensuring that chiropractic can continue to grow and serve as many people as possible.”

The college also is home to the Palmer Center for Chiropractic Research, founded in 1995, which has evolved as the nation’s largest and most highly funded chiropractic research effort. In 2000, the center received $35 million in outside funding – collaborating on research with the Department of Defense, Veterans Health Administration, hospitals, colleges and other universities.

In the Quad Cities, Palmer Chiropractic Clinics annually record more than 51,000 patient visits in Davenport and Moline. It has provided more than $6 million in pro bono care to qualified active-duty personnel, veterans and their dependents through its Military Care Program, launched in 2008. The clinics also are the official chiropractic care provider to the Quad City Storm, Quad Cities River Bandits and provide care to participants at the Quad Cities Marathon.

“As much as we’re proud of our global reach, we’re also committed to our local impact,” Mr. Marchiori said, adding that “the best is yet to come.”

Visit Quad Cities President and CEO Dave Herrell described Palmer’s innovative approach, modern facilities and its team and winning culture as “an important driver for our region’s success. They have a global reach and influence, which positions the QC competitively to attract best-in-class students and faculty,” he said.

In its efforts to continue to grow enrollment, Palmer competes with the same communities the Quad Cities region competes with for talent including St. Louis, Chicago, Minneapolis, Kansas City and Atlanta.

“We are aligned and share their goals to be the pacesetter in the chiropractic space,” Mr. Herrell said of the tourism bureau. “Palmer’s 125th anniversary should be celebrated – but it should also be an inflection point for what we can do together over the next 125 years.”