Niabi Zoo has received a grant for $160,000 from the Roy J. Carver charitable trust to help fund its new Painted Dog exhibit, a key component in the zoo’s masterplan.

The animal preserve near Coal Valley, which opened for the season last month, also recently celebrated the birth of Bitinze, an eastern black-and-white colobus monkey. 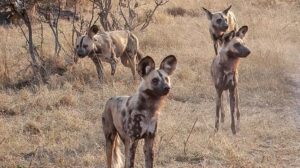 “So many wonderful and exciting additions have been made, and are underway at the zoo,”  Director Lee Jackson said in announcing the Carver grant. “Rhinos, prairie dogs, and now Painted Dogs will be added to the list of exciting new animals to experience at Niabi.”

“This wonderfully generous gift will bring us that much closer to having the entire exhibit paid for,” he added. “This grant and the many donations received by our community mean we are almost there.”

The addition of Bitinze brings the zoo’s population of black-and-white colobus monkeys to nine. They are part of a North American breeding population of 170 monkeys, Niabi said in an earlier news release.

Bitinze is a male and was born Monday, May 9, to mother Kenna and Tuli, Niabi’s 16-year-old male. The black-and-white primates are found in the woodlands of tropical Africa, and are favorites among zoo visitors, Mr. Jackson said.

Niabi Zoo partners with more than 50 other zoos in the United States and Canada to manage the breeding of black-and-white colobus monkeys as part of a species survival plan.

Baby colobus monkeys, including Bitinze, are born completely white and will remain so for about three weeks when patches of dark hair appear. In three months, babies take on mom and dad’s black and white coloring.