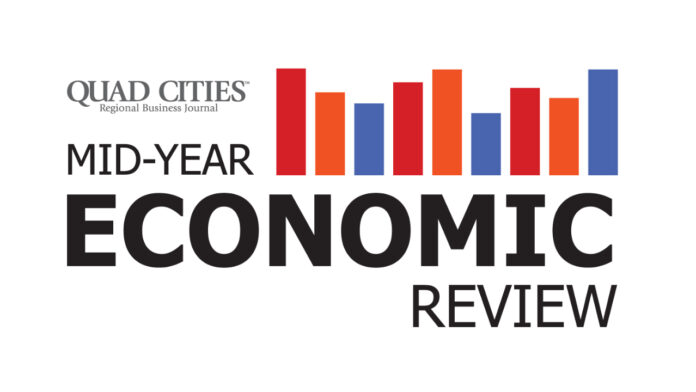 Global supply chain issues sparked by a pandemic-fueled demand for goods, U.S. China trade, and inflation will be on the menu when top economist Phil Levy headlines the QCBJ’s first-ever Mid-Year Economic Review.

Mr. Levy, chief economist at the global freight-forwarding company Flexport, and an expert on global trade and trade policy, will examine how the economy has changed in the past six months as well as look ahead to what the final six months of the year will bring.

Scheduled to join him is a panel of Quad Cities experts who include:

As Flexport’s chief economist, Mr. Levy leads its qualitative and quantitative economic research based on public policy developments and proprietary data. His research informs the market on global trade trends and helps Flexport – which connects its 10,000 clients and suppliers across 109 countries – to product and business strategy decisions that best serve clients.

For two decades he also researched and formed global trade policy as a senior fellow on the Global Economy at Chicago Council on Global Affairs and adjunct professor of strategy at Northwestern Kellogg. He has served on the President’s Council of Economic Advisors, most recently as senior economist for trade, and was a member of the Policy Planning Staff for U.S. Secretary of State Condoleezza Rice.

He has testified before congressional committees and written regularly for Forbes, The Hill, and Foreign Policy. He is the author of “Rebuilding a Bipartisan Consensus on Trade Policy” and has taught global economic policy and international trade at Georgetown, Columbia, the University of Virginia, and Yale.

With such deep and wide experience, Mr. Levy’s expertise has been in high demand as the thirst for information has increased about the supply chain challenges that are making getting goods so difficult and driving down the economy. So much so that he was included in an article in the New York Times entitled, “The Pandemic’s Nerd Celebrities,” much to his daughter’s delight, Mr. Levy told the QCBJ.

The increased attention to the supply chain also is not surprising given the impact that COVID-19 has had on consumer behavior and, in turn, on the ability to move goods of all kinds around the world, he said. Before the pandemic, the ratio of demand for goods vs. services remained relatively constant, he said. “There was little variation.”

During the pandemic there has been a sea change as the demand for durable goods increased by 35% and demand for services declined sharply due to COVID-19 restrictions and closures. That increased consumption of goods put inordinate pressure on the supply chain to deliver more than ever before, he said. “Think of it as a giant traffic jam, with everyone getting on that road at the same time.”

The question now, Mr. Levy said, is “Where will we go next?”