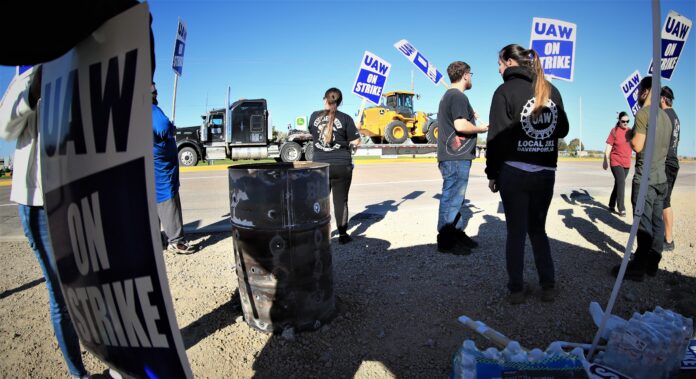 The five-week UAW strike that led to a groundbreaking contract was a victory not only for 1,100 union workers, but for Deere & Co. and the communities the tractor-making giant calls home, the University of Iowa Labor Center’s Paul Iverson said.

The six-year pact ratified Nov. 19 was a win for striking John Deere workers, Mr. Iverson said because they “stood up for current and future generations” to get back wages and benefits that had been eroding since the farm crisis of the 1980s. The contract also shows that “collective action works,” he said.

“The end of the strike at Deere & Co. means that our families can get back to more financial security during the holiday season and our local economy can keep moving ahead during this period of economic recovery from the COVID-19 pandemic,” said Moline Mayor Sangeetha Rayapati, whose city is home to John Deere World Headquarters. “The prolonged unknowns for residents, workers, and industry can come to a close with hope for a bright future ahead for us all.”

East Moline Mayor Reggie Freeman said “It really boils down to the point of when people believe in different things and they work to come to a conclusion that’s good for both sides.” It’s “in the best interest of all parties,” including local municipalities, he said.

Since the deal was struck, Deere leaders have remained positive about a pact that is expected to cost the company $3.5 billion. Added to those costs will be 8 percent raises that Deere announced Tuesday, Nov. 23, for its salaried employees, many of whom were pressed into service on the factory floor when production workers took to the picket lines.

“Deere’s strong fourth-quarter and full-year performance was delivered by our dedicated employees, dealers, and suppliers throughout the world, who have helped safely maintain our operations and serve customers,” John May, Deere chairman and CEO said in the earnings news release. “Our results reflect strong end-market demand and our ability to continue serving customers while managing supply-chain issues and conducting contract negotiations with our largest union. Last week’s ratification of a six-year agreement with the UAW brings our highly skilled employees back to work building the finest products in our industries. The agreement shows our ongoing commitment to delivering best-in-class wages and benefits.”

Mr. Iverson said the new contract also is important because it will help the company retain skilled workers and attract new ones by restoring Deere’s reputation as a great place to work. That image was eroded due to cuts in wages and benefits over the past several contracts, which resulted in the company having difficulty filling open positions, he said.

Wage and benefit cuts were among a host of external and internal factors that went into a work stoppage that, Mr. Iverson said, is “a snapshot in the long history between Deere and the union.”

It stretches back to the 1940s, and has been marked by pivotal contracts and conflicts. They include the historic 163-day strike of 1986-87, and a 1997 contract agreement that created a two-tier payment structure and ended monthly pension payments for new hires. That contract ensured at that time that new and future Deere hires would not make the same wage as their predecessors, Mr. Iverson said.

The 1997 contract was on the minds of many striking workers he spoke with on the picket line, he said. As one picketer told Mr. Iverson, “I’m a third-generation Deere employee. I’m standing here to be sure this job is here for the fourth and fifth generations.”

The global pandemic also played a part in the strike, the former labor union lawyer turned educator said. Unlike salaried workers and Deere executives, production workers could not work from home. They reported to work every day making  “great products” that resulted in “some of the greatest profits in Deere’s history,” Mr. Iverson added.

Manufacturing isn’t the only place where labor unrest is brewing. Fast-food, retail, health-care and food-processing workers, for example, also are part of what has been called a “nationwide labor rebellion.’

That rebellion comes as public support for labor unions is at its highest point since the 1960s. According to Gallup’s  annual Work and Education Poll conducted from Aug. 2-17, 68% of Americans currently approve of labor unions. That’s up from 65 percent last year. It’s the highest percentage recorded by the public polling agency since 1965 when 71% of Americans said they approved of unions.

The pollster has been been checking the public’s pulse on organized labor support since 1936. Throughout the poll’s history, more Americans have approved of unions than not, Gallup news said. From 1972-2016, however, the public’s view of labor declined to some of its lowest points.

The growing public support for unions today, combined with other factors, including a record 10.4 million unfilled job openings nationwide recorded in August by the U.S. Labor Department, have contributed to the widespread contract disputes at Deere and across the country.

AFL-CIO President Liz Shuler told “The Hill,” a publication that covers Washington, D.C., that workers are “fed up” with bad working conditions, stagnant pay and a pandemic that worsened income inequality, which has led them to demand better contracts.

That was true at Deere, Mr. Iverson said, where UAW production workers had repeatedly given back wages and benefits to the company during bad times and expected the company to allow them to share in the record earnings being posted in the current good times for Deere. That didn’t happen with the company’s initial offer, Mr. Iverson said, which led 90% of UAW workers to reject it on Oct. 11.

When a new deal failed to materialize, the union went on strike Oct 14. On Nov. 2, UAW members rejected a second offer that doubled raises in the first offer, provided an $8,500 ratification bonus and ensured no increases in health-care premiums and co-pays. It also offered two pension plans: a 401(k) and a traditional monthly pension payment plan, which was missing in the first offer. This time, Deere workers voted 45% to 55% to reject the deal. A third offer made by the company Nov. 17 made more modifications to the contract, including the way performance bonuses are calculated. Workers ratified that pact Nov. 19 with 61% of workers voting yes and 39% voting no.