A new Davenport community meeting site – called the Fairmount Community Center – is in the works, and city officials are seeking the public’s input on the project.

An open house forum is set for 6-8 p.m. Thursday, May 12, at the Davenport Public Library – Fairmount Branch, 300 N. Fairmount St. Organizers are seeking public input on the center. 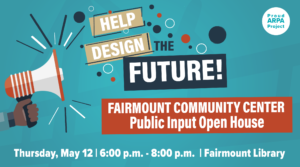 During this meeting, the public is invited to share their questions, visions and hopes for the planned community center. City staff and members from OPN Architects are scheduled to be at the meeting.

The event will be a two-hour open house format and the public is invited to come and go as they please during the event.

“The community will lead the conversation on this community center,” Courtney Jones, administrative services manager for the City of Davenport, told the QCBJ on Monday. “We want this center to be something that serves the community.”

City officials hope the community center’s final design will be complete this fall, and the center will be built and ready for use in 2025, Ms. Jones added.

However, at this point, little else is known about the community center project. The center will either be a separate building located next to the Fairmount Branch library or an addition to the library building. The size and seating capacity of the new center are still in the works. Also, it is not known when construction will begin or what the price of the project will be.

When the Davenport City Council approved the project July 15, 2021, a total of $2.2 million was approved for the new community center. The project is also being funded, in part, through the American Rescue Plan Act.

“We are excited to get the residents involved in the planning process of this new asset in our community,” Ms. Jones said in a press release. “The community center is being built for the use of the residents and we want their input on the design of the facility. This will truly be our community’s plan.”

City officials and OPN Architects have met to begin preliminary design concepts for the community center. The OPN team will be in Davenport over the next few months to conduct numerous meetings to gather input from staff, members of the public and stakeholders.

In addition to the May 12 meeting, city officials will meet with the Davenport City Council, neighborhood groups, employers, property owners, educational entities, church members and social services organizations to gather input on the project.

“This is an exciting time for the future of our community,” Chad Dyson, director of Davenport Parks and Recreation, said in the release. “The project will invest $2.2 million into the community, providing a new area for gatherings, meetings and opportunities.”