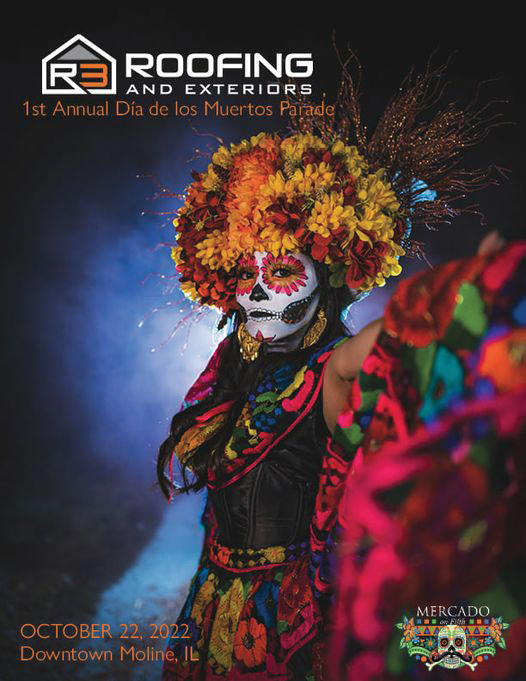 Five months before the inaugural Día de los Muertos Parade is set to step off on Saturday, Oct. 22, Quad Citians already are lining up to take part in the first of its kind procession planned by Mercado On Fifth.

Anamaria Rocha, Mercado’s executive director, said recently she is pleased by the high level of interest in what she hopes is the first of many Quad Cities’ Day of the Dead parades. Día de los Muertos is a Mexican holiday where families joyously welcome back the souls of their deceased relatives for a brief reunion. It is celebrated each year from Oct. 31 to Nov. 2.

Ms. Rocha told the QCBJ that parade conversations began in 2021 after leaders had noticed a void in Halloween parades, perhaps due, in part, to COVID-19. “So it was a good opportunity to bring the Day of the Dead here,” she added.

In addition, she said, Mercado leaders also had been looking for a way for the Hispanic community to share the “very beautiful meaning” of Día de los Muertos with the Quad Cities.

Mercado also chose to host the parade after the season to coincide with the Figge Art Museum’s Day of the Dead exhibit, Ms. Rocha said.

“We have a collection of handmade Catrinas, and will feature a traditional altar in partnership with LULAC Council 10,” Ms. Aaronson said. Catrinas are elegantly dressed female skeleton figures that symbolize the Day of the Dead.

The Day of the Dead is so important to Mercado’s leaders “it’s even part of our logo,” Ms. Rocha said. Mercado is promoting the parade using photos from a professional photographs featuring Ms. Rocha and friends dressed in Día de los Muerto makeup and costumes.

Also among those celebrating the parade addition to the area is Janessa Calderon, executive director of the Greater Quad Cities Hispanic Chamber of Commerce (GQCHCC).

“It is an honor to have a community as welcoming as the Quad Cities to embrace such events as this one,” Ms. Calderon said. “The Day of the Dead Parade will give the Latino community an opportunity to showcase our historically rich culture and the importance of Dia de los Muertos. It celebrates life and death in a magical and beautiful form.”

Ms. Rocha said Visit Quad Cities also is partnering with Mercado to help attract a more regional audience. The parade will start on 12th Street and River Drive, Moline, and head east down River Drive, then south on 19th Street and west down Fifth Avenue – ending at the start.

Parade entry registrations, which opened in late April, quickly began coming in, Ms. Rocha said. She’s hoping it will “inspire families to create floats in honor of their loved ones.”

Entries are required to showcase the parade celebration theme.

Mercado encourages anyone who appreciates the holiday to participate, no matter their ethnicity. Just sure to “engage in cultural appreciation rather than cultural appropriation,” Mercado’s website says. “It is important to remember that creative expressions of Dia de los Muertos are intended to represent our love and honor for those who have preceded us in death.”