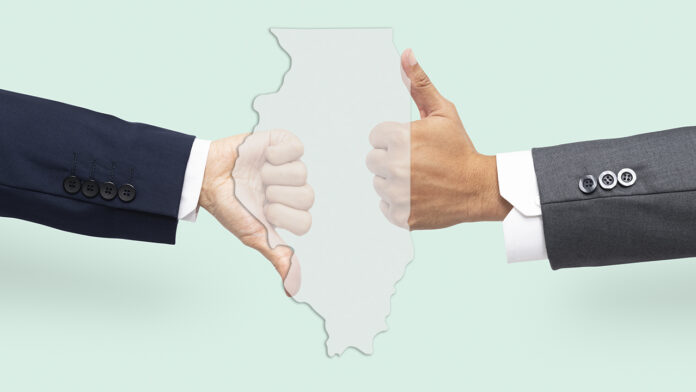 Illinois union supporters and worker rights groups are aggressively pushing for an amendment to the state’s constitution during the Nov. 8 election that, if passed with more than 60% of the vote, would make worker protections nearly unbreakable.

The debate surrounding the amendment has been succinctly framed as it will either protect Illinoisans’ right to collectively bargain for wages, benefits and working conditions or it’s a union power grab that will hurt the state’s economy and cement Illinois’ reputation as a bad place to do business.

Unfortunately this seemingly benign amendment portrayed as “protecting workers” is the wrong direction for Illinois and should be opposed by everyone who wants Illinois to have a better economy. Business owners and leaders should publicly oppose this now before it is too late.

“We have already seen how the Illinois Constitution has impaired the ability of elected officials from managing our state’s huge pension debt and this new amendment, if ratified, will result in a significant cost for taxpayers while further damaging Illinois’ economic reputation,” said Mark Denzler, president and CEO of the Illinois Manufacturers’ Association (IMA).

Why is this being pushed now? Because it can be. Unions are flexing their muscles because of renewed public support of union workers, and with unemployment as low as it has been unions have increased leverage.

Voters instead should take a hard look at the current business climate in Illinois and ask if this will improve it or make Illinois less competitive.

All of the states surrounding Illinois are right-to-work states, and the headquarters of high-profile companies including Caterpillar, Citadel, Boeing and are being moved from the Land of Lincoln to Texas, Florida and Virginia, respectively, which also happen to be right-to-work states.

Chief Executive magazine conducts an annual survey of CEOs and business owners from every state and Illinois was ranked as one of worst states to do business. Texas and Florida were the best. Indiana came in at No. 6 best, Iowa at No. 17, Michigan at 18 and Wisconsin at 19. All of those states, save for Wisconsin, were also higher than Illinois in CNBC’s annual state’s business competitiveness study. Coincidence?

There is virtually no way that Illinois will revert to a right-to-work state in the near future even though former Illinois Gov. Bruce Rauner pushed for that to happen during his tenure with no success. Unions are deeply embedded into the state’s economic fiber so adding this amendment is like throwing gasoline on an already robust fire.

We aren’t anti-union. We are against policies, and particularly constitutional amendments, that make Illinois less economically competitive, which this amendment will do.