The next president of Augustana College is being praised as a scholar, teacher, innovator and mentor of students.

“We are all educators in some way… Students are learning and growing in every experience they have,” said Andrea Talentino, who will become Augustana’s ninth president on July 1.

Ms. Talentino, currently the provost of Nazareth College in Rochester, New York, was introduced during a ceremony Tuesday morning on the Augustana campus in Rock Island.

“I really care about being in a values-driving institution like Augustana,” said Ms. Talentino, who will officially become Augustana’s next president upon the retirement of current President Steven Bahls.

The next president of Augustana added that some of her goals include building strong relationships with Quad Cities businesses and organizations, preparing students for life after college and helping students grow.

John Murabito, chair of the Augustana Board of Trustees and leader of the presidential search committee, called Ms. Talentino the “right person to lead Augustana in this critical time.”

He praised her innovative and creative thinking and her work in helping students for many years. Mr. Murabito, who was unable to attend Tuesday’s ceremony because of a business commitment, made the statements in a prepared video shown during the event.

President Bahls said the new president is the “ideal person to lead this institution” and he is convinced that Augustana’s best days are yet to come with “a leader like Dr. Talentino.”

In a news release from Augustana, Ms. Talentino said: “Any institution can have internships, study abroad, opportunities for research, but it’s how you put them together, how you create natural connections and meaning between all of them that makes the difference in what’s outstanding and what is ‘just fine,’ and Augustana is committed to being outstanding.”

Before her job at Nazareth, Ms. Talentino was dean of the College of Liberal Arts at Norwich University in Vermont. Before that, she was associate dean at Drew University in New Jersey. She also held a faculty position at Tulane University. She has earned a bachelor’s degree in political science at Yale University, master’s and doctorate degrees in political science from UCLA, and earned an MBA with a concentration in organizational leadership while serving as dean at Norwich. 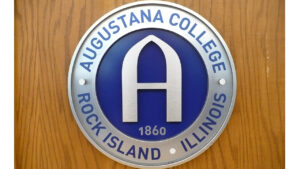 The search for Augustana’s ninth president began months ago with a newly formed search committee that reviewed materials from more than 100 candidates and conducted 50 interviews with candidates. The 13-member committee in November recommended the hiring of Ms. Talentino to the college’s board of trustees. That board unanimously approved the recommendation.

“It was a tough job,” Mr. Murabo said about the search committee’s work in finding the next college president. “We expected great interest from great people.”

He added that it was wonderful to see the strong interest among many people for the position.

The college’s new leader will succeed Mr. Bahls, who announced in January he will retire effective July 1. He started his tenure with the college in the summer of 2003.

“It has been the highlight of my professional life to serve Augustana College, and I look forward to my next great adventure,” he said in a previous news release.

Since announcing his retirement, Mr. Bahls has received much praise for his work at the college.

“Steve’s leadership has driven Augustana to new heights, and he’s done that with a steadfast commitment to growth, to innovative programming, to diversity and to the long-term financial strength of the college,” Mr. Murabito said in information from the college.

Shortly after he announced his retirement, Mr. Bahls offered this advice to his successor:

“It is a journey. It is not a sprint… Savor those special moments with students. Savor the opportunity to welcome eager students at the opening convocation. Savor the wonderful feeling of seeing students grow during their time at Augustana College, and handing them their diploma.”